Abstract
We have discovered distinctive red/gray chips in all the samples we have studied of the dust produced by the destruction of the World Trade Center. Examination of four of these samples, collected from separate sites, is reported in this paper. These red/gray chips show marked similarities in all four samples. One sample was collected by a Manhattan resident about ten minutes after the collapse of the second WTC Tower, two the next day, and a fourth about a week later. The properties of these chips were analyzed using optical microscopy, scanning electron microscopy (SEM), X-ray energy dispersive spectroscopy (XEDS), and differential scanning calorimetry (DSC). The red material contains grains approximately 100 nm across which are largely iron oxide, while aluminum is contained in tiny plate-like structures. Separation of components using methyl ethyl ketone demonstrated that elemental aluminum is present. The iron oxide and aluminum are intimately mixed in the red material. When ignited in a DSC device the chips exhibit large but narrow exotherms occurring at approximately 430 °C, far below the normal ignition temperature for conventional thermite. Numerous iron-rich spheres are clearly observed in the residue following the ignition of these peculiar red/gray chips. The red portion of these chips is found to be an unreacted thermitic material and highly energetic.

1. First author is Professor Niels Harrit of Copenhagen University in Denmark, an Associate Professor of Chemistry. He is an expert in nano-chemistry; current research activities and his photo can be found here:
http://cmm.nbi.ku.dk/
Molecular Structures on Short and Ultra Short Timescales
A Centre under the Danish National Research Foundation

The Discussion section of the Harrit et al. paper Active Thermatic Material Found in WTC Dust http://www.bentham-open.org/pages/content.php?TOCPJ/2009/00000002/00000001/7TOCPJ.SGM mentions that they are going to continue to pursue related lines of research, and try and establish where the nano-thermite was derived from. So hopefully this is not the last from these scientists.

Here are a few interesting points from the paper that relate to the TV interview:

They were able to determine that there must have been a huge amount of nano-thermite moved into the WTC by weighing the samples of the red/gray chips in comparison with the weight of the other dust, minus chunks of concrete and glass.
A 1.6g sample that was taken not far away from the scene, collected by Ms MacKinley, yielded 1.74 mg of chips. Thus, the fraction of red/gray chips was 0.1% by weight. Another sample yielded 69 red/gray chips in a 4.9 g sample of dust that had had the chunks of glass and concrete removed from it. They are going to do more studies in this area and try and refine an estimate of how much nano-thermite was used, I understand, (refer p 23 ).

They asked the question: Did the Technology to Make Highly Exothermic Nano-thermite exist prior to 9/11? And they found a report by Gash et al. dated April 2000 – 17 months before 9/11 which showed that it did – it was cutting edge technology by the looks of it. Refer: https://www-pls.llnl.gov/?url=about_pls-scientific_staff-gash_a

They also mentioned that a report on an April 2001 conference discloses who was known to be working on such explosives at that time. The 221st National Meeting of the American Chemical Society held in San Diego featured a symposium on Defense Applications of Nanomaterials. The session provided a video on the work going on, which was 10 years old approx. «At this point in time, all of the military services and some DOE and academic laboratories have active R & D programs aimed at exploiting the unique properties of nanomaterials that have potential to be used in energetic formulations for advanced explosives..» ( p 26 ).

Plus they mention on p 29 that «No red/gray chips having the characteristics delineated here were found in dust generated by controlled demolition using conventional explosives and methods, for the Stardust Resort & Casino in Las Vegas (demolished 13 March 2007) and the Key Bank in Salk Lake City (demolished 18 August 2007).

This and other reasons are presumably why Neils Harrit suggested we should ask the military about nanothermite during the April the 6th TV interview. 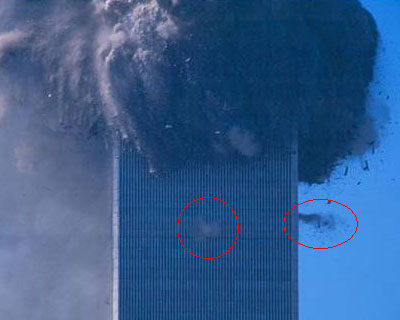